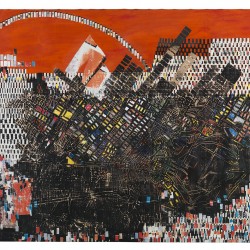 there’s an artist in LA called Mark Bradford and he creates oversized pictures out of canvas and paper and paint. he calls his work “social abstraction” or abstract art with a social context “clinging to the edges”. (p.3) i can buy that; art should do more than one thing. the painting above is titled ‘Scorched Earth’ and was born out of Bradford’s memories of race riots in LA.

Bradford came of age during the AIDS crisis of the 80s, a frightening decade that caused him to flee to Europe, over and over, learning about the world. he attended art school in the 90s when he was 30 years old, which is quite old for an artist.

here’s an explanation of his creative process. it’s fucking fascinating:

He starts with stretched canvas and builds up its surface with ten or fifteen layers of paper–white paper, coloured paper, newsprint, reproductions, photographs, printed texts–fixing each layer with a coat of clear shellac.  Sometimes he embeds lengths of string or caulking to form linear elements in the palimpsest. When the buildup reaches a certain density, he attacks it with power sanders and other tools, exposing earlier layers, flashes of colour, and unexpected juxtapositions. Not until the first sanding does he begin to see where the painting is going. (p.2)

i’m taken with the use of the word “attack” to describe how he edits his material. the attack edit. i think i’ll try that with this short story i’m working.